Williamson Turn explained in details, A Navigating officer on the bridge should be familiar with the the action to be taken in case of a man-overboard situation and initiate the maneuver to recover the person at the earliest. In total, we have three types of turn, out of which Williamson’s turn is the most preferred as we can use it in any situation. 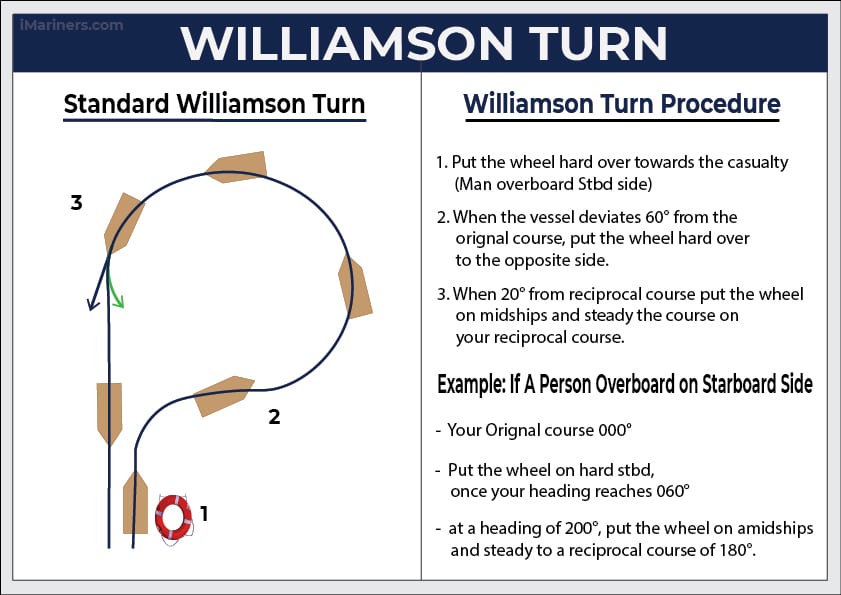 Williamson turn Poster Download in A4 size (Password: iMariners) for onboard Ship Posters or training purposes. (a reference to iMariners.com is required if used on any blog or video streaming sites)

What is Williamson turn?

The Williamson Turn is one of the preferred maneuvers in case of a person falling overboard to bring the vessel or small boats to its reciprocal course she was doing.

It is named after John Williamson of USNR, who invented and used it first to recover a person who went overboard.

The best thing about Williamson’s turn is that it brings the vessel on an almost reciprocal course, making it more effective at night or in restricted visibility. However, it can be used in any condition. Still, if it is daytime and clear visibility, an Anderson turn (single turn) or a Scharnow turn would be the quickest to reach the casualty.

Steps to be followed as below.

Few Questions Related to the topic:

Q2. which is faster for man overboard, the round turn or Williamson turn?
Ans: Round turn (also called Anderson turn and single turn) is faster in a MOB situation, but you need to consider the state of visibility and weather conditions while taking action.

Q3. If in Orals, the Surveyor asks to describe the Williamson turn maneuver
Ans: Tell him the Procedures, advantages, and disadvantages.

In this post we have only discussed about Williamson’s turn, for Single Turn (also known as Anderson and Round turn) & Scharnow turn you can refer out seperate post by clicking the link.