What should you do to avoid colliding with another boat? iMariners Boating

What should you do to avoid colliding with another boat? It’s been said; “A collision at sea can ruin your whole day.” In order to avoid this, there exists a general set of Federal and International rules of conduct between vessels known collectively as the ‘rules of the road’. 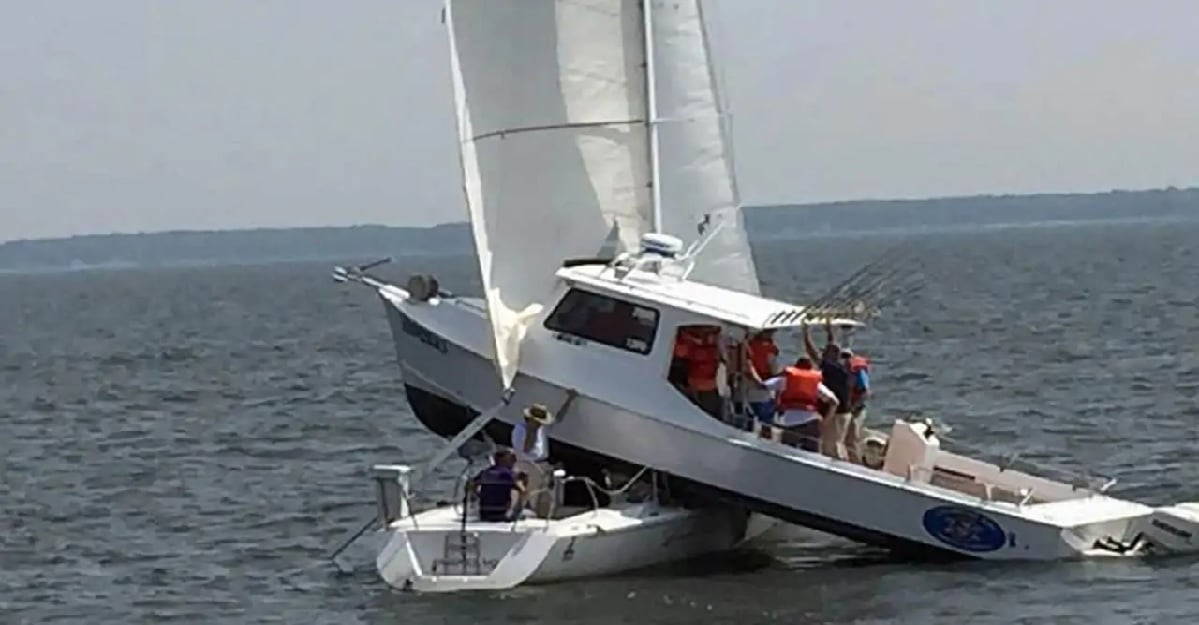 There are a various things you can do to avoid colliding with another boat while sailing.

Part of the rules cover what lights vessels should show which is covered in Navigation Lights. Another part of the rules is meant specifically to guide actions of vessels in close proximity to each other.

Just as we stop our car at a red light and go around another car to pass it, there exist maneuvering rules to guide us when we are on the water. To read these rules in their entirety go here: https://www.navcen.uscg.gov/navigation-rules-amalgamated

The rules of the road cover every type of water craft from small to large. However, there are situations the rules do not cover. For instance, when three or more vessels converge there are no specific guides to use except common sense.

If we know the rules of conduct between two vessels, then we will have a very good idea of how to react when there are more than two vessels meeting or passing.

Throughout the rules caution and anticipation are emphasized. If you aren’t sure what’s going on you can come to a complete stop, sound the danger signal (5 or more short blasts), or call the other boat on the VHF radio.

Typically, channel 16 is used as the hailing channel for recreation vessels but ships are more likely to be monitoring channel 13. It can be useful and quite reassuring to speak with the freighter coming up from behind in a narrow channel after dark.

The ship is probably going at least twice your speed and will be upon you soon. If you communicate to the ship’s bridge you intend to stay well to the starboard side of the channel that takes care of the situation.

And, the ship’s captain will be relieved also; now the captain knows you are aware of the ship, that you are probably competent because you communicated over the VHF with him, and that he can proceed knowing it won’t be a dangerous situation.

PLEASE NOTE: USE OF VHF IS NOT ALLOWED FOR COLLISION AVOIDANCE PURPOSE, hence some cargo ships might not reply to you on VHF, rather they will take the action as per COLREG and expect you to do the same.

The more maneuverable a vessel is the more likely she is to be the give-way vessel in a close quarters situation. This is why the powerboat is give-way to a sailboat; why a boat that is moving is give-way to a vessel stopped; and why they all give way to a large ship in a narrow channel.

One note on powerboats and sailboats. A sailboat is a boat that is being propelled by sail alone, if her engine is on and engaged she is considered to be a powerboat even with her sails up.

Sailboats meeting. Here you will need the ability to determine what tack you are on and what windward and leeward mean. You will recall from Points of Sail that our tack is defined as the opposite side on which the mainsail or boom is carried. Below, the boat on the left is port tack while on the right the boat is starboard tack.

The sailboat on starboard tack is stand-on while the boat on port tack is give-way. When boats give-way they should, in general, turn to starboard. It’s much easier for a sailboat to turn than to slow down or speed up. Ok, so what happens when two sailboats come together on the same tack? 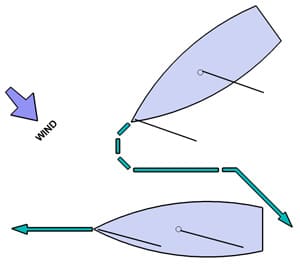 In most rights of way situations it is best to make an early and substantial change in course. Here substantial would be 20 degrees or more. This action, on the part of the give-way vessel notifies the stand-on vessel that she can proceed on her way without danger. 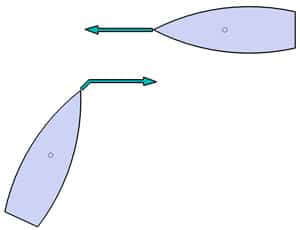 Powerboats crossing. When two powerboats cross it is a similar situation to two cars coming to a 4 way stop. The car (boat) on the right has the right of way. The give-way powerboat turns to starboard and passes behind the stand-on vessel. If this were at night the give-way vessel would see a red sidelight on the stand-on vessel meaning she should take early and adequate action. The stand-on powerboat would see green on the give-way vessel meaning it is ok for her to proceed on her course and speed.

Powerboats meeting. When coming straight at each other both powerboats turn to starboard.

Sailboat and powerboat. On open water, not in channels, power gives way to sail. In narrow channels large ships have the right of way.

Vessels overtaking. The overtaking vessel is give-way and must stay out of the way of the vessel being passed. It makes no difference if one of the vessels is power and the other one sail. Whoever overtakes must keep clear. The exception to this is for large (over 20 meters in length) ships in narrow channels. Here, the hard to maneuver ship is stand-on.

Pecking order of vessels. There is a basic order, in the navigation rules, that governs who stays out of the way of whom. Essentially, the hardest to maneuver vessels are stand-on while the easiest give-way to others. In the following list vessels further down stay out of the way of vessels higher up.

Diving. Vessels engaged in dive operations or with anyone in the water. They display the international code flag “A” (alpha) by day; this is a blue/white vertically striped swallow tail. State laws also may call for dive vessels to display the US traditional dive flag (red with a white diagonal stripe). It is important for all other vessels to stay well clear.

Fog signals. Vessels underway are required to produce sound signals in restricted visibility; This could be fog, heavy rain, or smoke. All signals are repeated every two minutes or less. A prolonged blast lasts 5 seconds while a short blast is for 1 second.

Thanks for reading, If you have any suggestion related to the Article or wish to write boating articles reach us via contact page.